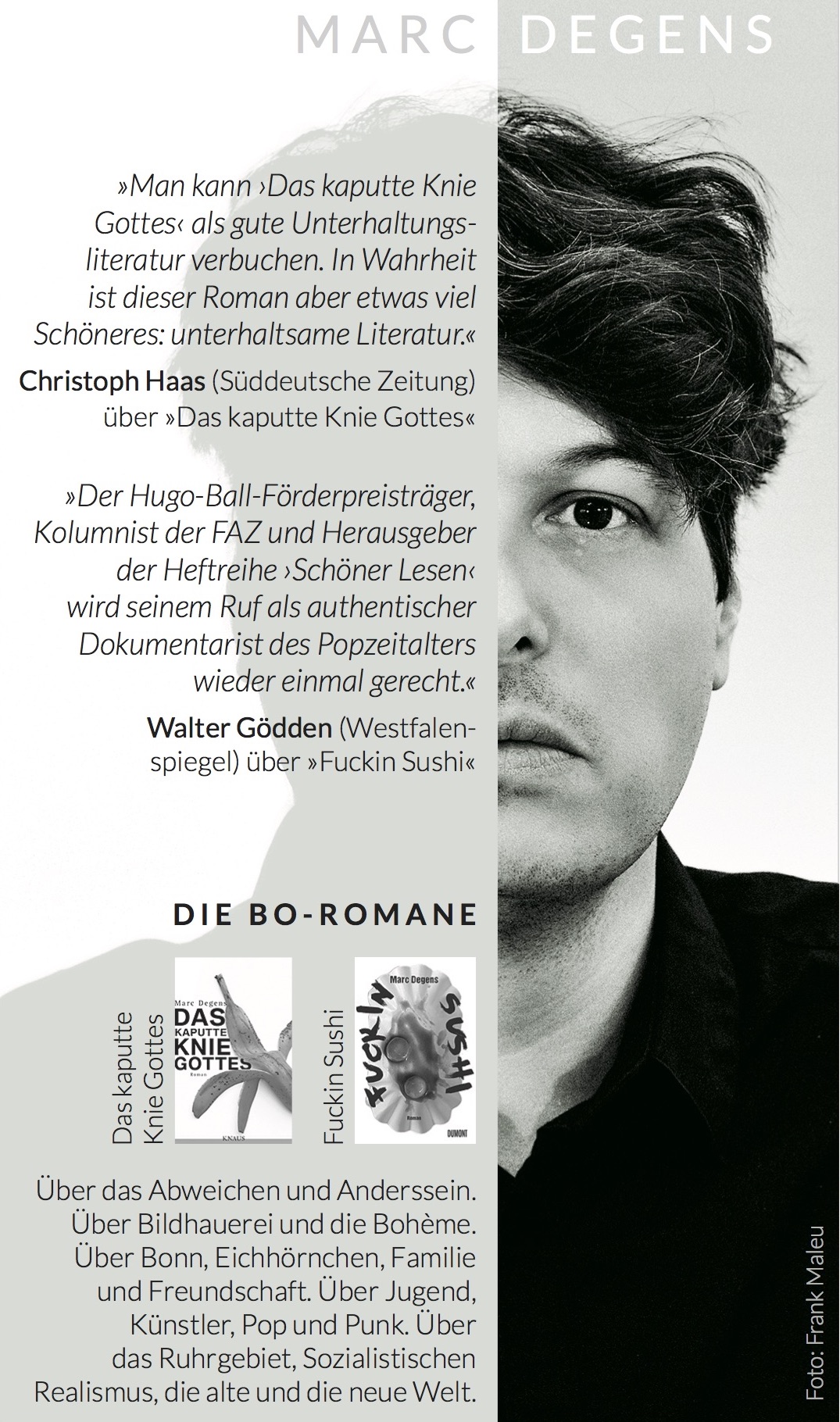 Marek Bartelik: How do you perceive the relationship between the medium of writing and other mediums, such as painting or music? And how do you deal with question in your writings, particularly in your book we will be discussing?

Marc Degens: Good books, novels or poems have their own sound. It’s a matter of music. They have an a musical property. Descriptions in literature can be painted like an oil painting, concrete or abstract art. Many techniques and means of expression are universal. You can transform a phrase from one medium into another medium, if you like to. For example a painting by Martin Kippenberger has more in common with a song by the Ramones than with a painting by Salvador Dalí, Balthus or Lucian Freud. Or the poems by Allen Ginsberg, the music by Bob Dylan and the comic strips by Robert Crumb – they all have a lot in common, in form and content.
A central theme of my novel „God’s Busted Knee“ is yet another similarity. At the beginning of their career many artists – writers, painters, composers – are outsiders. They work alone. Their success or their failures changes them and their works. That’s what my book is about.

Briefly explain your creative process. How much does a piece of art or music that inspires you determine the formal aspects and the narrative in your story?

I learn new techniques from other media. You can’t transfer every technique from one medium to another – but a lot. In my novel I connect the chapters in a way I know from many comic magazines. The „to be continued“-panel at the end of a story. It’s not a cliffhanger, it’s more like a forecast. A phrase like „Now our Hero is safe, but next week …“ This is not an invention by comic book creators, I know, but I discovered this technique by reading comic books.
Also you can use other artists as a role model und learn from their attitude. For instance I learned from John Lennon, that you can compose „She loves you“ – and three years later „Strawberry fields forever“. Two great songs, but radically different. Such things helps me as a writer to say, okay, now I’ve written this book in this style, but the next book will be something completely different.

Mark Twain didn’t like the German language. In German you can build very long sentences. The first part of the verb is on one page, the second part on the other page. The German language and literature can be very complicated, like in the works of Thomas Mann. You can see his effort while reading his novels. Many people like this, but I don’t.
I want to hide the struggle. „God’s busted knee“ should be easy to read, the readers should concentrate on the story and not on the style. Like in the works of my favorite American writers: Richard Yates, Philip Roth or Raymond Carver. And I assure you, it’s not easy to write an easy-to-read novel.

Select a work of art or a short piece of music to be presented in conjunction with our conversation.

»Lost in the Andes« by Carl Barks.

Why have you chosen Carl Barks?

I love his work. His work is entertaining, funny and also serious. He is a great storyteller and combines the everyday life with the great myths of the human race. Also he is a great illustrator, I think his comic book art is nearly perfect.
Finally I learned a lot of his work: Donald Duck has a lot of problems, but his life is marvelous. He finds the golden Helmet, he is mastering the Matterhorn and Lost in the Andes. I learned from Donald Duck that you can find adventures anytime and everywhere.

Are there other artists from the Ruhr Valley who inspired you or your art? My answer is yes. The painter Martin Kippenberger, the film and theater director Christoph Schlingensief and the musician Helge Schneider. They all were born in the Ruhr Valley – like I was. When I had a close look at their work, I find out that it is funny, serious and entertaining at the same time. And it’s full of self-mockery.
I think this is because of the Ruhr Valley. It’s a region in the hand of clerks. You can’t impress your parents or friends if you say – Hi Mom, hi Dad, I am going to write a novel or become a sculptor – but they will be impressed if you say, hey, from now on I will play underwater rugby.
For an artist in the Ruhr Valley it’s easier to live in Berlin instead of Bochum. In Berlin you can meet a lot of other artists, you can build networks and so on. In Bochum you are more or less on your own. But that gives you a lot of freedom to create something extraordinary.

* This interview is based on a questionnaire sent to the participants in the panel discussion on current literature inspired by the visual arts and music, which took place at the New York Public Library on November 17th during the Ninth Festival of New Literature from Europe in New York. Dr. Marek Bartelik is a New-York based art critic, art historian and poet. He currently serves as President of AICA International, an association of art critics with 63 national sections worldwide.